"...ain't nothing wrong with a woman who got a little backbone"

Driving back from the rink tonight, on my second skate, I was thinking about how Sundays are my happy days and how lucky I am to be able to skate with a group of awesome, kickass guys and girls. The girls are all strong, confident women who kick some serious ass. I'm lucky to have found them and have so much fun during our skate up the shore.

Then there is the group of guys who accept me and don't ever bat an eye because I'm the girl.

Maybe I miss a pass a faster man could pick up, or maybe I go down on a shove a man could stand solid on. Nobody cares, and when I come to the bench I get a glove tap and a "good pass" or "good shift" or, if I'm lucky, a "good goal" (I got one of those tonight and it was dandy).

I'll flatten a beer as fast as any of you, but I digress...

This week has been a tough one, emotionally, on a number of fronts. Luckily, I was able to end it with a game of hockey with a group of awesome gals and then followed by an awesome skate with a group of equally as awesome guys.

Then I came home to see the AZ Cardinals had "punished" a QB by making him wear a Supergirl costume.

Your punishment for being subpar is to wear a dress.

And I got angry.

I have been competing in sports my entire life. For most of my life I have spent it trying to shake off the perception that I would show up to practice in a dress and need a special dressing room because my anatomy was different.

That for some reason my dress meant I was automatically not quite as good.

Hockey was always my first love.

I grew up worshiping my dad (I still do). He played hockey - he was no Lemieux - but I spent so many nights as a kid watching him skating around the ice, handing him Shopsy's beef sticks over the glass, and being convinced my dad played for the Detroit Red Wings.

I still wear his old Cooper shin pads from the 70s.

There were so many trophies and medals. Every time he went away for a tournament he called to let me know how he was doing and always put his medal around my neck when he came home.

I learned how to compete and win from him.

I'll never forget the night mom was sick at work and my cousin, my babysitter, had to call dad at the rink. She asked me, "What team is your dad on?" and I cried so much when she told me he wasn't a Detroit Red Wing.

Why else would there be so much Wings merchandise in our house? Dad must play next to Probert.

And I will admit, I never wanted to play girls' sports. Why?

It was simple - girls' sports were the inferior sports. If you wanted to be an athlete you needed to keep up with the boys.

It was and is so wrong that the narrative to girls is if you want to be strong and competitive you need to compete against the boys. It still rots me and I still find myself comparing my progress to how I stack up against men. I guess it's ingrained in me now.

And so my dad took shots on me in the yard. I would be equipped in goalie gear as he kept firing, reminding me to never consider myself second to anyone - but that girls didn't play hockey so I needed a niche.

I played broomball with the boys instead of the girls, requiring a provincial exemption. It wasn't that the girl's team wasn't good enough - it was just that if you wanted to make it you needed to play with the boys.

So, I figure skated while I played hockey on Kitt Lake Steady in the woods. I figure skated to the top level achieved by any skater in our home club. I coached professionally.

But my heart was always with the boys, on the ice, and I sat by hoping for a game.

"If you ever want to play you'll have to be a goalie. They won't let you play otherwise. But they always need goalies."

I wasn't a goalie, I was a skater. I played out sometimes, but it was always on the pond. If you want a "serious" game you need to be a goalie. Then they'll come looking.

It wasn't about skill or heart but about what was needed so the boys could play. Necessity. Just picking up the slack.

I decided this year, after 20 years, to lace up my hockey skates again. I was fortunate to find a group of women who needed a spare and let me get back on the ice again. It's been 7 months now, and every skate is happier.

I've since expanded my network, gotten involved more, and my heart is full, skating with some wonderful women who have reminded me of the fun hockey can be.

But I cannot leave out the men. My allies.

After an emotional month of Weinstein, of #metoo, of the every day systemic violence and lack of action toward the epidemic of domestic violence that plagues our province and country, a post by a female hockey friend of mine - shoutout Deb Bellows - made me realize how lucky I am to have so many allies in my life.

A male friend of mine invited me to a skate a few months ago. I was super hesitant - I was a woman. I remembered being told as a kid that I had no place in the dressing room. How would I change? Surely changing with men was wrong so I shouldn't be there.

And so being a part of something I loved was quashed because of physical appearance and what I should and should not do as a woman.

Echoes of childhood rang through my head: "You'll never keep up." "They won't let you play." "You'll only get hurt."

But I went, and I am forever happy I did.

I know there are so many, but I just want to name drop a few folks who deserve thank yous for being strong allies and just generally good folks in the dressing room (and I'm not limiting it to these guys as there are many more...these are just the main folks who have been consistent over the past few months and who I adore for their comraderie, brotherhood and laughs) -

Thank you for every pass you fire across but know I might miss.

Thank you for sitting around and never treating me any different (even when that means creaming me behind the net because I have my head down).

Thank you for telling me when I fuck up.

Thanks for the passes I manage to tip in.

Thank you for always being respectful.

You all rock. Seriously.

And hey, thanks for managing to not sexually harass or assault me in the dressing room when I sit around in a sports bra and hockey pants. The media tells us girls it's extremely hard for men to not do that.

So many of you are fathers and I love that you are instilling such awesome values in your kids. I listen to the stories and feel so confident in the generation you are shaping.

And thank you for helping me get back to a huge part of who I am that I have been missing for a long time now. My dad always told me he'd never seen me happier than when I would step on the ice. It's been 20 years but he is still right.

And every Sunday when I call him, driving from one rink to another, he reminds me that I'm now him at 35. He had to retire at 37 so my joke is always that I'll break his family record. My cousins playing junior and senior might give me a run for my money on that.

And that makes me feel pretty damn good about who I am.

Knowing there are so many men out there who support us in what we do, and who tell their daughters and sons that the game is all about the fun, no matter what is inside your hockey pants, makes me so happy and hopeful.

Guys, you're all pretty damn awesome. 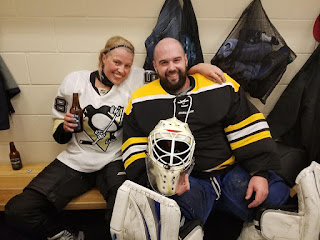 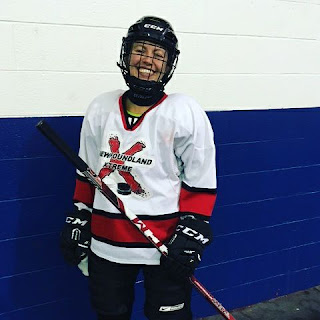