Yeah, it's been a Trews week. The Trews are deadly.

This post is a bit different. I'm usually here being vague and rambling, not really making a whole lot of sense but thanks for reading, anyway.

I never really talk much about specifics. About me. But tonight I figure I had might as well top the other night's emo vent session with something a bit more positive.

For those of you who have gotten here from, most likely, Twitter, it is not news that I run. I'm a runner. I've been a runner for 12 years now.

Shit. When did that happen?

I have a love-hate relationship with running. We've had our ups and downs and we've come out with a mutual understanding. I don't hate it, I don't love it, but we co-exist and I kick its ass sometimes to make myself feel better.

Tonight was a bit of a turning point for me, so I think I'd like to get it out there. Maybe it will inspire some folks. Maybe it will make someone say, "Running is stupid. Thanks for turning me off it." Whatever makes y'all happy.

I was always fairly athletic in high school, but never ran. I ran when we had to at practices.

I figure skated competitively, played a scattered game of hockey, played 4A basketball (and lord almighty, was I shitty and it turns out my aggression on the court isn't welcome in high school basketball...PSA: don't elbow and then shake the nuts you don't have at some missus from King's Cove. It will get you ejected), and I played broomball.

Looking back, I was an asshole in all sports. Imagine.

Anyway, after I went to university and my metabolism slowed to that of a reptile, I blew up. You see, I'm essentially a puffer fish. I can look at a cookie and my ass grows three sizes that day. It sucks, but it's under control.

But then I was 200 lbs. The high school athlete (who died for smoking darts in the trench and was also student council president and debate champ because everyone needs to be well-rounded) was 200 lbs.

I was so uncomfortable.
Self conscious.
I had grown up with a lot of pressure that skinny was important.
Not strong, skinny.
The numbers on the scale were how your value was weighted first and foremost.

I needed something I could do between my crazy work and school schedules, so I picked up a pair of sneakers and went to the Field House. I was petrified. I stood there watching people work out and I left. I went back the next night, late. I got on the treadmill.

I was a high school athlete. I could do this running thing. Right?

I got on the treadmill, ran for less than two minutes and vomited in the bathroom.

From there I got determined. I started going regularly. And the weight came off. But the obsession started. I ran and ran and ran, and I ate less and less and less. And the number plummeted, which was good, right?

I was 90 lbs. I wasn't well. But I ran. It helped me cope with the stress of school and trying to be perfect and all of that shit.

Eventually I began to wake up and realize that there was more to being successful and "in shape" than numbers on a scale. So, I started looking into running properly and what it would take to make it a sport I could possibly compete in and stroke that competitive streak I had in high school.

Fast forward to 2012 and I was running varsity cross country for MUN. I was a 30 year old graduate student, the second oldest on the team and my team mates referred to me as Nan Wilder since I was the forever student.

I made that damn travel team though and I kicked down barriers. I trained my ass off and ran like my house was on fire. I was in the best shape of my life. I was strong.

After that season, I got sick. I was out of commission with pneumonia for a bit and bouncing back was hard.

Everything blew up when I buckled to pressure. Art, my XC coach, had been feeding me workouts that I was half-assing, and picked me top 10 in his Tely picks for 2013. I wasn't ready. I went out hard.

And I was puking on someone's lawn on Topsail Road at about 3 miles in. I bombed it so badly that I cried and couldn't stop crying in the damn field afterward.

I got down. The weight went back on. I couldn't shake it. I lost my motivation and I found my times crashing every time I would race. I would stitch, I would nearly vomit running paces that were a joke for me a year earlier. I got discouraged and I quit.

In 2016 I decided I had enough. I was sick of it. I decided I needed help getting back and a friend recommended his sports nutritionist who is also a triathlon and running coach (I'm also a triathlete but I love it so it does not deserve to be here...except swimming. Fuck swimming).

Tara is a miracle worker. She's a kickass athlete herself and she figured me out. She put me on a strict nutrition plan to kickstart to metabolism and get strong again. God, I missed the wine. She let me drink during the playoffs though. She isn't a monster.

And 2017 has been even better. This year I hit almost every distance at a PB, minus the damn 5K but I stitched in the race I was on pace to hit. That one will be mine this spring.

Tara and I chatted this week about going hard again, putting my head into it and she asked if I was ready. I told her yes.

I looked at the workout for today and I almost threw up. There was no way I could hit those paces and I wasn't going to hit all 10 reps. No way. My confidence has been shot for years and my head sometimes gets the best of me. Not to mention I played a game of hockey tonight where I was the absolute shits and my legs wouldn't move.

But I talked myself into lacing up the sneakers and I ran.

And I hit every rep about 10-15 seconds faster than goal pace. Some sub 4s. I never thought I'd run a sub 4 again.

I finished the run and laughed until I nearly bawled. And I realized I'm coming back. If all goes well and I don't wind up injuring myself like an idiot I should come out of the gate this spring faster than Ive been since 2012...or faster.

And this is the first time since 2012 I've looked at myself and known I can do it. I just need to keep my head in it. It will come.

I'm not self centred or cocky. I'm actually the opposite and pretty damn self conscious. But I feel like I'm actually in the best shape of my life. I don't know how. But I am.

I know it might just seem like one good run to a lot of you and you're wondering why this has catapulted me into a different mindset. A barrier came down. One I didn't think I could get past. And I'm feeling good.

My confidence is back.

And I know next year is going to be the best one yet. 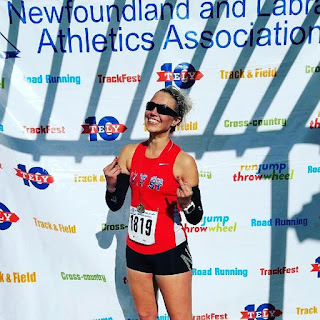