See, I have these boots.

I had never worn the boots, despite being 6 years old, and the boots became the crux of many a joke over the years.

This is a blog about the boots.

Our varsity cross country team is about the head to Halifax for the AUS Championships. It just so happens we are going to fly back home the night of Mardi Gras and, given we were clearly going to kick ass, we were going downtown to celebrate. Our flight would get in at 10 pm.

I needed a costume. I settled on Catwoman. Now, not just ANY Catwoman, Halle Berry Catwoman. 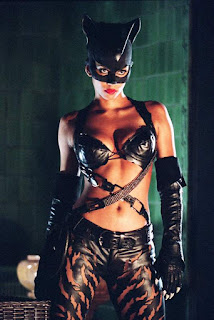 I went to a million places and found every piece of the costume, right down to the belts, the headwear, everything -

But I could never find the right boots.

"Why have the boots never been worn?" you ask.

When it is time to go through security, they tell me I need to take off my coat. I lean in and, with a whisper, explain that I'm wearing a costume that isn't family friendly and no kids need to see the Itty Bitty Titty Committee here strapped up in leather and spikes.

"Ma'am, you still need to take off the coat."

Here I am, in all of my glory - tired, cranky, thirsty and standing in an airport looking like the security guy just paid good money for an old fashioned flogging.

AND THE ALARM KEPT GOING OFF.

I swear I walked back out and in about 576 times (okay, maybe an exaggeration, but still...) until they finally did a body scan as I was about to cry and wondering what else I would have to take off.

GET ME TO MARDI GRAS.

The plane takes off and the night is young, the weather is great, the team is pumped. We watch the map and our little plane logo circling over St. John's.

Then it starts to go back.

We ask the attendant who will not tell us what is going on and, until we were on the ground again, IN HALIFAX, did they tell us it had been too foggy to land. We are all checking our watches and thinking at least we'll get to rock Halloween somewhere in Halifax that night.

You have never seen Catwoman, a wizard, Jesus, a cowboy, two cowgirls and Batman so pissed off.

So, why have I never worn the boots? We landed at 6 am, missed Mardi Gras, and I spent a lifetime sitting on a plane wearing more pleather, studs and chains than I am comfortable with.

Last night I wore the boots and now you know their story. I'll probably never wear them again but hey, I can tick the box on "owns a pair of boots from a sex store." 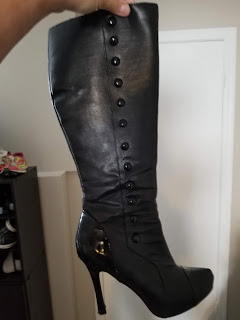