My Nan Mouland turned 91 today. She's always been a very wise woman who lost her husband very young, raised 7 kids, countless grandchildren, great grandchildren and neighbourhood kids, and who never remarried. A force, she had a big hand in raising me.

She always tells the story of when I was born, in the storm that would eventually take down the mighty Ocean Ranger, and how the snow was leveled across the tops of the trees in the droke that now sits in front of our house. My grandfather, a hulking giant of a man, sat in his truck behind the plow and waited as they beat through the snow, trying to get to his newest granddaughter. The power was out, mom was warming bottles of milk between her legs.

Nan always tells me of how she ran into our house, bundled me in a blanket and ran me out into the storm. She slid into the truck, uncovered my face and says I just gave a big, "POOF," as I exhaled, green eyes glaring up like, "Woman, get me to the heat, for the love of god." She took me to their house and I stayed there for a while, then. 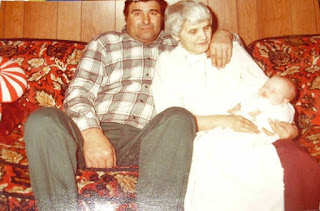 Look how tiny I was!

With dad on the boat and mom in the plant, every morning mom would carry me from my bed, take me to either one of my nans and lay me on the couch, tuck me in and go to work. When I would wake, I would spend days watching Spiderman and Hercules, informing nan she needed to convince dad to get cable. A girl needed her CHCH cartoons.

Nan would then spend days telling me stories of her growing up, of every animal she ever had (I always wanted to hear about the animals), and she still laughs at how I knew every storybook word for word, so much that if she missed a word I would make her start over.

She also still talks about going to church and having my bus driver, a member of the church, always telling her about her tangly little saucy granddaughter down in Spillar's Cove who was a creature of habit - racket with her mother over not wanting to dress up or brush her hair, and always showing up in the morning, slapping her lunchbox at him and saying with a sigh, "Here b'y, take that now, I forgot something."

I don't know who he was talking about.

I've been very blessed to have strong role models growing up. Everyone pushed me to focus on education, focus on happiness, and to aim high always, because even if I failed there was a lesson there.

I know that without them I could not have accomplished half of what I have.

For both my grandmother and my father, literacy was paramount. While my grandmother would read her bible and the news every day, my father would conquer novel upon novel and has been a walking trove of history. He still does and is. They both read to me and told me stories, long before I could even comprehend them or what they all meant.

I always read an endless amount of books every week, curled up under a blanket and caught in the worlds created by Stephen King, Arundhati Roy, Jeffrey Archer and others. And I would write - I wrote entire anthologies of poetry, short stories, essays, words that would just pour on to paper or into my Smith Corona typewriter. There are still binders full, somewhere.

Without the nurturing and encouragement of my grandmothers and parents I can say confidently there would not have been plaques and writing awards, recognition, national scholarships, research awards or degrees.

I have not read as much lately. As timely as it is, this week I ordered a pile of books and committed myself to reading again. I've pulled out new finds, old favourites, and have once again tucked under my quilt and am getting lost in Joel Thomas Hynes' world of the troubled Johnny Keough.

I need to get that part of me back. 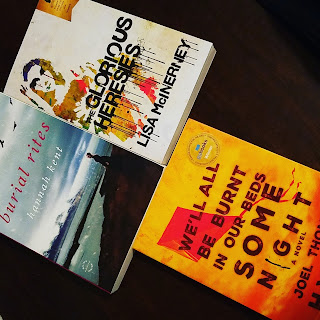 While my father has always been my greatest role model, the man I have admired and worshiped since I toddled along behind him, dragging crab boxes and chasing him around the yard and wharf, this does not, however, mean I do not also realize the strong women who have raised me and what they have instilled in me.

In my grandmother I have seen a resilient woman, one who tackled hardship, loss, sickness and trials. While she has always been stubborn, she taught me to stick to me guns, to fight, and to persevere.

And she taught me how to take my lumps when I'm wrong, chasing me up from the beaches with a bow swinging behind me because no matter how many times she told me to stay away from the anger of the ocean there was always something that drew me there.

She is 91 now. Every Christmas we never know if it is the last one where we will all go watch her open gifts, eat ju jubes and chips, carry on and laugh as only the Mouland girls can do (we're all a time and the sense of humour cannot be understated).

She has raised three generations of strong-willed, loud, powerful women and men, boys and girls (she's raised some deadly hockey players, b'ys), all who carry a lot of her traits - from her big smile, to her booming voice when she preaches, and her constant drive to ensure you always make a big place in this world and make yourself known.

Before I hung up today, I asked her, "So, what's your wisdom for this year, grandmudder b'y?" She replied with her usual soft sigh:

"There are a lot of unhappy people in this world. Just try to not be unhappy."

I will, Nan. And I will try to display every quality that you have taught me, instilled in me and all of the strengths that being the grandchild of such a powerhouse have given me. 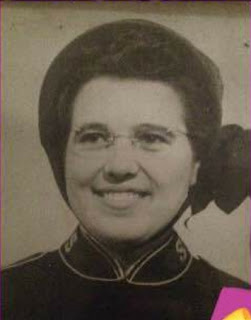 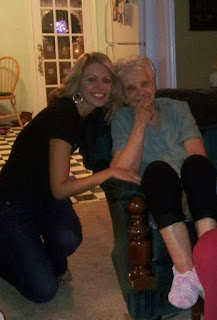 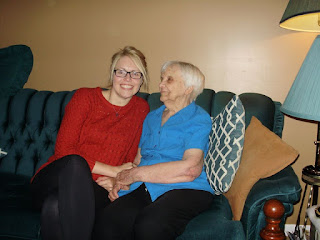 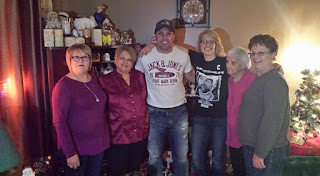