There are a lot of things I could write about on a day like today. But I looked at the calendar and realized today is the anniversary of one of the best decisions I have ever made - today is Sid's gotcha day.

Apologies for how photo heavy this is at the end but he's cute.

Anyone who has known me at all knows that Sid is my constant companion. An 80 lb lump of grumpy who sighs at me constantly, snores like a freight train and sheds enough to make a pack of dogs. A big beagle/lab cross who I fought to get but, as I reiterate, nothing worth having comes easy.

In April 2009 I lost my first best friend. No, Caesar wasn't my first dog - there had been Miko and Zack before him - but Caesar was my dog, my heart dog if you will, a 16 month old 100 lb boxer I drove to St. John's to pick up from a family who couldn't give him the time he required. I knew I could, and over 10.5 years we were inseparable. Long drives, runs, hikes, and when I moved away to go to school I would call and tell him I was on my way home. He would wait on the landing in the garage until he heard me pull up. He would tackle me through the door every weekend until dad called one day to tell me cancer was taking him away and he went without me by his side. I've never forgiven myself for that. I've taken solace in knowing dad was there. 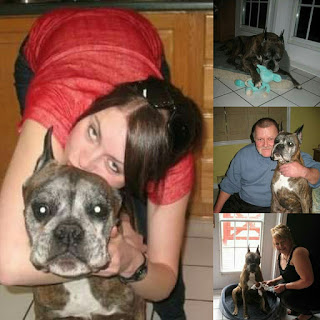 In 2010 I was ready for another. It was my birthday and, as those close to me know, I don't do well with birthdays. It was a snowstorm, I was sitting in my apartment reading the Telegram alone, and saw an ad from the SPCA advertising a black lab puppy. I hopped in my little Cobalt and drove in a snow storm to meet a little black ball of terror I knew would never work in my apartment. As I was leaving the volunteer asked me if I would like to see the adult dogs. Of course I would.

I went downstairs into a mass of kennels - a husky with a sign on her door saying she was unsocialized, a big black lab whose owner had passed away, a white mutt who stared at me disinterested. Then the volunteer opened a kennel door and said, "This guy is a good buddy."

Out strolled what I knew was not an adult dog. He was introduced to me as a 3-4 year old beagle named "Dreyfus" who had been living under someone's steps on Bell Island. The kind lady who was feeding him brought him in but her dogs kept beating him up, so she had to turn him in. This is a trademark of Sid - a big heart but a big pansy who now has a history of being beaten up by other dogs. It's one of his quirks.

Dreyfus stuck his chin under my neck, snuggled into my shoulder and I knew he was my dog.

I came back the next day with my then-boyfriend, took the pup for a walk and he tried to hop in the trunk when I went to get my mitts.

"What are you waiting for, woman? Take me home!"

I went back to the shelter and filled out the application. It was a Friday. 2 days processing, they said. I called on Monday, nothing had been processed.

I called on Tuesday, still not processed.

I called on Wednesday and the volunteers were rude, telling me when it was processed they would call and to not call back.

I called again and spoke to the same young man who had opened the gate and introduced us. He whispered into the phone, "Your application was rejected when you put it in. They said your building doesn't allow dogs."

I was furious. I called Helen, the building manager, and she assured me she had not received any call. Had she received a call she would have approved it. "Dwan, there are 6 dogs in that building. I know you. I have zero concerns."

I called the SPCA back. I was told the true story - over the weekend they had released him to a trial family who returned him and said he was "impossible to house train." I was then lied to again - "Beagle Paws have agreed to take him so he will have a good life."

Unbeknownst to the SPCA, a friend of mine happened to be the best friend of one of the great women who puts her heart and soul into Beagle Paws. He reached out and was told they had not agreed to take a dog from the SPCA. It was news to them. She assured him should a file come across her desk she would call me immediately.

On Friday I received a call: "I've just gotten a call that we need to get him out or his time is up. Are you ready for your dog?"

I scrambled out and got everything together. Within an hour a lanky, excited pup bounced through my door and my heart. We've been inseparable ever since.

I named him Sid. He wasn't a Dreyfus. And no, he isn't named for Crosby because I'm a fan girl. While I struggled to find a name for him we were watching a Pens-Wings game that went to a shootout and I yelled that I would name the dog after whoever scored and ended the madness.

His name was almost Henrik.

He wasn't 3-4 years old - he was 9 months max.
He wasn't impossible to housetrain - he had a severe UTI and kidney infection.
He wasn't some throw away - he was my dog.

And since that day in 2010, Sid has been my furry confidante, a piece of who I am, my best friend.

Over the past 8 years there have been surgeries for accidents and lumps, strolls, moves, break ups, life changes, ups, downs, tears shed into his fur, late night conversations where he always listens (sometimes sighs because that's what he does), singalongs in the car, dog park days, a little brother who he tolerates and I think he secretly adores, movie nights and hockey games.

He's a Sabres fan, unfortunately. You see, back when he was a puppy he was laid up for a pulled muscle and the only thing that perked him up was Ryan Miller on TV. He even has the jersey.

I almost forgot his gotcha day today. My mind is occupied and I haven't been feeling well. In true Sid fashion he has been snuggled up, my little furnace and furry shoulder. He didn't even remind me!

Your face is grey now, your knee doesn't let you run or chase me anymore, and I hate the fact that you're getting older. Everyone always says, "Beagles live forever!" and I keep hoping they're right.

Here's to many more years of grumpy Sid. 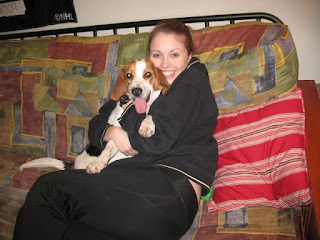 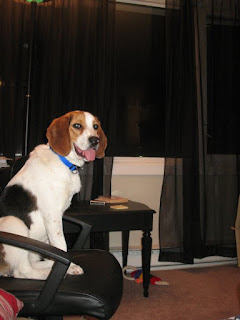 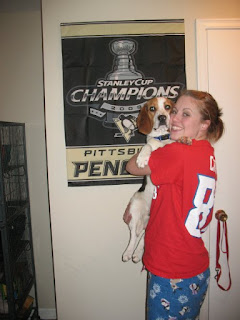 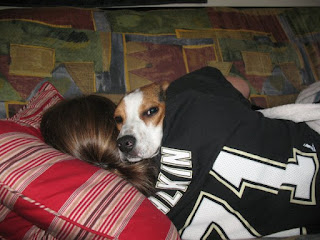 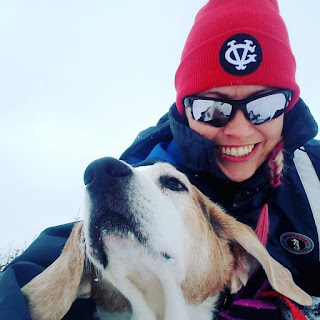 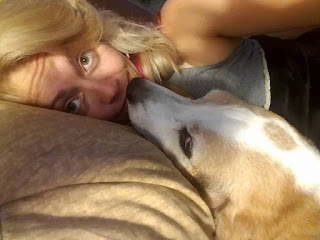 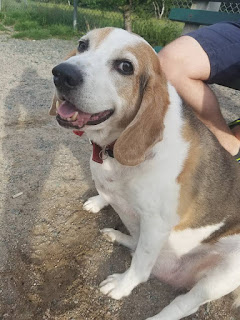 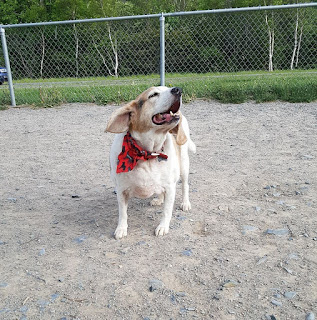 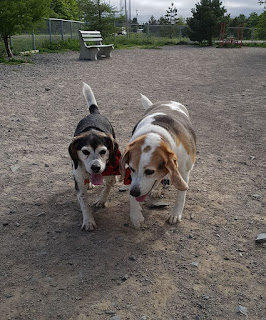 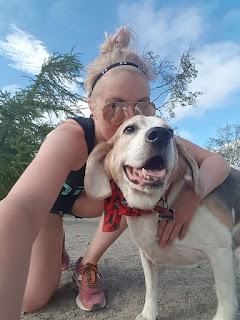 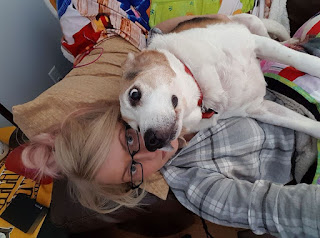 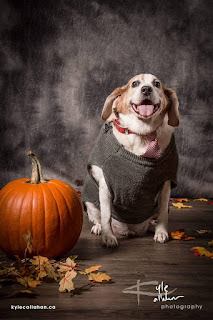 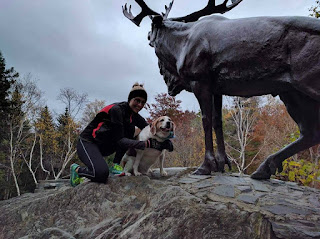 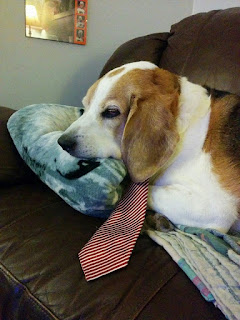 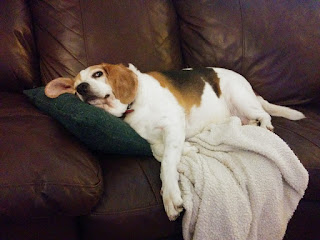 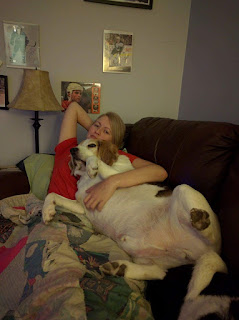 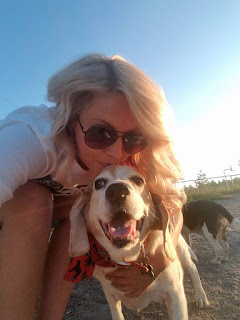