We played our hearts out this weekend.

It has been a heavy week and the hockey world is hurting. Looking around the arena on Saturday, there were jerseys with name plates that said, "Humboldt," "Broncos," and stickers that displayed the logo representing 16 of our own lost. We tried to do our part. 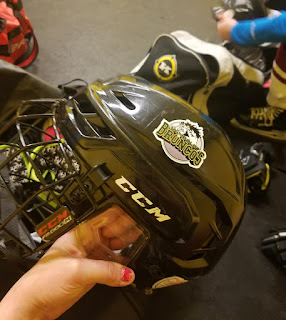 Half of us arrived on Friday, full of nerves and excitement. The beer helped. We sang, we laughed, we watched the Pens lose (and I swore a lot). It was a wonderful place full of energy that I, and we all, needed. And I looked around a lot, once again realizing how special teams are.

On Saturday we headed to the arena, a little hungover and riding a bag of nerves. We laced our skates, sat in anticipation; we hooted, hollered and ramped up what we needed for what we figured was our hardest game to come. 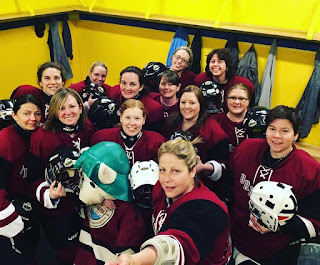 I somehow opened the scoring. We beat St. John's 2-1. We were on wheels and the team played unreal. We played hard and we played tough.

We drank beer, we celebrated, and we laced up again for Bishop's. We trounced them 5-0. Quigs was a wall.

We headed back, all tired and saying it would be an early night. 23 beer later I decided on one more as we harassed teammates in bed, knocked on doors, had singalongs and laughed until our stomachs hurt.

And I wouldn't have traded how tired I was the next morning for the world. 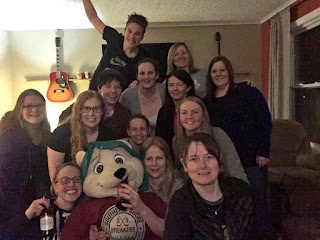 We went out against GFW, a little hungover, a lot tired, and got bounced. We didn't know if we would make the championship but it was likely. We went back, drank some more and waited.

And then we were in.

I don't think we could have played harder than we did in that game. We played against friends, women we've played with and against all year, and we played like dogs.

Denise was yelling. I put my forehead on the boards and couldn't watch. We stacked the line and as the clock wound down we realized we were going to do this.

There were yells and cheers, laughs and tackling. And in that moment I remembered what it was like to be a part of a winning team who was all guts and heart. We had won.

There were many laughs.

And my stomach still hurts from laughing.

I think that win meant a little extra this weekend. It was a weekend of friendship, of hard work, of fighting, of memories.

And we did it for you, boys. We made sure to lay sticks at the memorial on the highway. 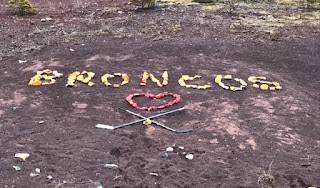 It's been 20 years since I last laced up my hockey skates. Back then I never dreamed I would be a part of such an awesome group of women, make friendships solidified in our love for the game and a good time. Hockey was something that was not achievable for girls and we sat by, watching the boys play, watching our dads, and wishing the game was more inclusive.

Now, girls all across the province lace their skates up and know that some day they too can spend weekends with their friends, playing the game they love, and making memories that will last a lifetime (even when you're 36 years old).

And I needed it. I am forever grateful that Laing messaged me on Twitter this year and invited me to a skate up the shore.

The Southern Shore Breakers kicked ass. And I could never have wished to be a part of a better team of women. Let's get back there and win it again, girls. Let's show them what we're made of.

And let's never take one minute for granted because, in an instant, you never know how quickly life can change. 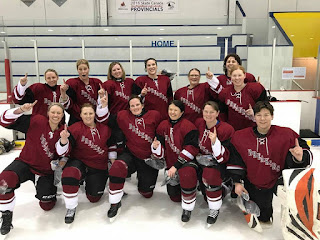