My blog tends to teeter from the personal to the professional. Those who know me know that my professional life is embedded deeply in who I am.

The following is an article I wrote and was published in The Union Forum, Issue No. 02 - Spring 2018. Bill C-68 is important to not only Newfoundlanders and Labradorians, and Atlantic Canadians but to all Canadians. For this reason, I felt like sharing.

On February 6, 2018 Minister of Fisheries and Oceans, Dominic Leblanc, announced changes to Canada’s Fisheries Act. For fish harvesters, their families, fisheries organizations and coastal communities, February 6 was an emotional day, one that many waited on with bated breath for decades.

I cannot recall the first time I heard the term “trust agreement.” I try to pinpoint it as it was a pivotal moment that shaped me and my future academic and career paths. When the dirty little tool called the “trust agreement,” or “controlling agreement,” entered into our fisheries, it was a point in time that retooled the mechanisms of an industry once built firmly on kinship and survival.

I grew up in Spillar’s Cove, a rural town outside the historic fishing community of Bonavista. Bonavista was the original “company town” in the Newfoundland and Labrador fishery. When then-Minister of Fisheries (or, “Minister of Fishermen,” as he often stated) Romeo LeBlanc introduced limited entry licensing and the policies of Owner Operator and Fleet Separation in 1979, five licenses were grandfathered and permitted to remain property of now-defunct Fishery Products International.

The names of these vessels exist still in policy documents – Margaret R, Random Buster, Silver Jubilee, Rose Venture, and the name I often sat as a child and repeated over the VHF radio in our little dining room, waiting for a response from my father – “Edwin Charles, do you read, over.”

The fishery was family to me. My grandfathers, father, uncles all made their livings from the sea; my grandmother, mother, aunts all worked in the fish plant.

The dichotomy of the independent harvester and the company boat was evident. While company control had not yet turned into the monster we are now faced with, the pieces were there; the creation of a class structure within the social fabric of our little coastal town. The result was a class of hardworking people who live an industry that runs through our veins as Newfoundlanders and Labradorians, yet often produced nothing more than a reduced paycheck and a suit of oil clothes.

As I grew up, our fishery changed. As value increased, there were forces under the surface, from deep corporate pockets, that were morphing the relations within our industry and within our towns.
Trust agreements began to rear their ugly heads in the 1990s, as our fisheries shifted to rely on more lucrative shellfish like snow crab and northern shrimp[1].

I remember standing on the wharf in Old Perlican in 2005, an excited 23 year old Masters student. I wanted to explore the dynamic of trust agreements in a community other than my own, I wanted to speak to harvesters about their experiences, and I wanted to produce work that would open up the discussion on these contracts with the devil.

In 2007, then-Minister of Fisheries Loyola Hearn, announced that there would be a 7 year period for harvesters in trust agreements to get out; in 2014, the efforts had consisted of nothing more than high priced lawyers finding more ways to open loopholes.

Since, the deep pockets of corporations have meant more licenses have been stripped from the hands of young harvesters who long to sail on the Atlantic. Plants continue to outbid those who try to better their enterprise and have driven the price of licenses far beyond the reach of the harvester. As a result, the autonomy of the independent harvester is overshadowed by corporations making decisions on when one sails, who crews a vessel; while watching money roll into their bank accounts without regard for those on the decks who bring the wealth to shores.

Trust agreements and corporate control beat down and strip what we, as resilient Newfoundlanders and Labradorians, have survived on for generations – hard work, preservation of our marine resources to ensure sustainable livelihoods in our coastal communities for the future.

When Minister Dominic LeBlanc stated and restated his commitment to enshrining Owner Operator, Fleet Separation and PIIFCAF in legislation, a ripple of hope could be felt throughout coastal communities. The corporate lobby came out swinging, seeing their deathgrip on the fishery loosening, and finally being told that value would no longer be funneled from our coastal communities and into banks on Bay Street. No more.

The five grandfathered vessels from Bonavista are more than names immortalized in fishing policy; they served to be harbingers of decades of erosion of identity and the social fabric of entire communities. The circumvention of these policies have had an effect far beyond the simple ownership of licenses and the concentration of wealth into corporate coffers.

To hear Minister LeBlanc’s announcement has been equally as surreal, emotional, and the result of decades of activism and dedication from those who hold the fishery dear to their hearts. 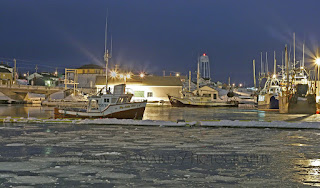 
[1] Trust agreements separate the beneficial interest of a fishing license from the title. Most often, these agreements are between a fish processing company and a harvester. While the company maintains control of the license and takes a hefty percentage of the profits, the harvester fishes for a share. These agreements vary in terms but one thing is constant: the harvester is a labourer, the company the employer who exploits.
Posted by Dwan at 2:11 PM