Everyone is doing their writing and jotting now, thinking about what a piece of trash 2017 was and how we'll all make 2018 better if it kills us. We're filling notebooks and flashcards and blogs with hope and regrets and promises to the universe that we are convinced we will put our minds to and make happen to make it all a little better.

I guess this is my turn.

I've never been one to be retrospective on time or years. I've always considered it a futile exercise since it is a constant repetition and cycle of one shit year coming to an end and hoping the next will be better, yet it follows along and so it goes until we ring in the next one and watch for our community on the NTV New Year's Eve roll.

But here I am. I guess 2017 has been different on a lot of levels and I feel like it is coming to a close in a way I never expected it to - with a lot of hope and promise.

Or maybe I'm just getting old and this is the type of shit you do when you're old. Either/or...

I've learned some lessons in 2017, some the hard way and some that just come by the way life tends to run at us like a freight train and makes us question if there isn't some weird sequel of the Truman Show happening.

- People change, paths change, and that's okay. There will be damage, scars, hurt and things left in the dust with a lot of questions but it will all work out. Every ding in the armour just helps shape it and make it yours.

- If there's something you're missing that used to be a part of your life and made you happy, go back there. Lacing up my skates again this year was mine and I don't know what I would do without the sport and the people it has brought back with it. If a piece of yourself is missing, go get it back.

- Happiness must be paramount.

- There is ugliness in the world (okay, a damn load of it), but there is also good. Find it.

- There are people out there whose paths are waiting to be crossed to make you feel like your world is being blown up, and all of a sudden they're the most important people in your life. And that initial explosion will make you ask a lot of questions and wonder who is writing the script, but you'll never want to change a thing and know that this is where you are meant to be.

- All our idols are mortal. They're going to die. And it sucks.

I know there are more but that will do for now.

For 2018 I'm not going to make any huge resolutions or commit to any big life altering "self care" regimes because a previous blog post should tell you what I think of all of that. I'm healthy, I'm fine, I eat well but I also like to eat shitty and I drink a lot so suck it, resolutions, I'm happy with who I am.

What I will do is throw a bone to the new year and ask it to be:

And if the new year could answer that tiny wish I've been tossing out to the universe for the past while I wouldn't be opposed to that either.

I'm allowed to be a bit of a hopeful, optimist sometimes.

And throw in a threepeat of Pens Cups while you're at it.

2018, you don't have big shoes to fill, but that doesn't mean you need to be a slacker.

And I'll even be cheesy enough to say I have a feeling this year will be the first year of the rest of my life.

"But I can't go back
And I don't want to

'Cause all my mistakesThey brought me to you." 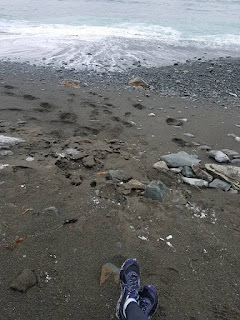